In April, the most fabulous and colourful of all Andalusia’s ferias (fairs) takes place in Seville. For six nights, Sevillanos dress up in elaborate clothes, parade around in horse-drawn carriages, eat, drink and dance till dawn.

Officially, the Fair begins at midnight, the Monday which falls two weeks after Semana Santa (Holy Week), and it ends the following Sunday at midnight with a sensational firework display over the Guadalquivir River. This week-long spring fair is typically held during the second half of April. However, the variable dates for Easter could push Seville’s Feria de Abril into May. In occasions and to ensure that at the very least the ‘Alumbrao‘ (turning on of the lights which mark the fair’s start) takes place at the end of April, it has been agreed that dates can change.

The History of the Feria de Abril

To better understand how the festival grew in size and importance to become what it is today, we must go back 170 years in history. The origins of the fair date back to 1846 when two councillors had the idea of holding an annual, three-day trading fair, to take place in April, for the purchase and sale of livestock. This initiative was approved by Queen Isabella II, and the first fair was inaugurated on the 18th of April 1847. In what could have been considered a remarkable achievement at the time, 25,000 people attended the first ever Feria de Abril. Since its first occurrence, Seville has hosted the fair almost uninterrupted, the only exception being a two years pause caused by the Spanish Civil War. As time went by the festival itself, as well as all the events and celebrations around it, changed from pure trading to a social occasion, a lot closer to the experience that visitors get today.

After a brief insight into the history of Seville’s most important celebration, it is time to move to the present and learn what you can expect to see and experience at the fair this year.

Two things will stand out above everything else during the inauguration night. Seville’s Feria de Abril begins the night of the ‘alumbrao’, the inaugural moment when all the fairground lights are lit. This is also the night known as ‘La Noche del Pescaíto’ which translates into ‘Fish Night’ thanks to the long-lasting tradition of eating fish for dinner. ‘Pescaíto frito’ (fried fish) is also served in most fair’s marquees, and we couldn’t recommend a better place than the south of Spain to enjoy this dish, so make sure you try it. 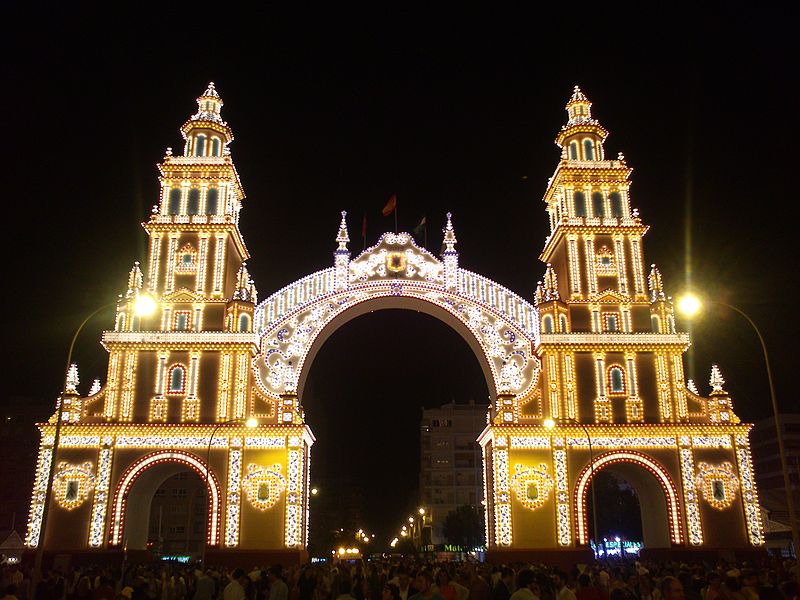 After dinner, most people at the Feria de Abril head for the ‘Portada’, which is a monumental and colourful facade erected at the entrance to the Feria. Thousands of lights are switched on by the Mayor of Seville at midnight as part of the ‘alumbrao’ inaugural ceremony, and the place becomes the traditional meeting point for Sevillians and visitors. The Fair itself and the entire fairground is like a small bright town. The people of Seville make their ‘casetas’ (marquees/booths) their respective homes, playing host to receive and entertain family and friends. In this temporary world, where houses are lantern-lit booths, the streets are named after legendary bullfighters.

Tuesday is the first official day of the Feria de Abril festival. Horseback parades, women wearing beautiful flamenco dresses and the men in traditional suits known as ‘el traje corto’ are seen through the enclosure. Considered by many as the birthplace of Flamenco, the barrio de Triana (Triana neighbourhood) lies just across the river, so it shouldn’t come as a surprise to learn that the colourful dresses are known as ‘trajes de gitano’ or gipsy suits. 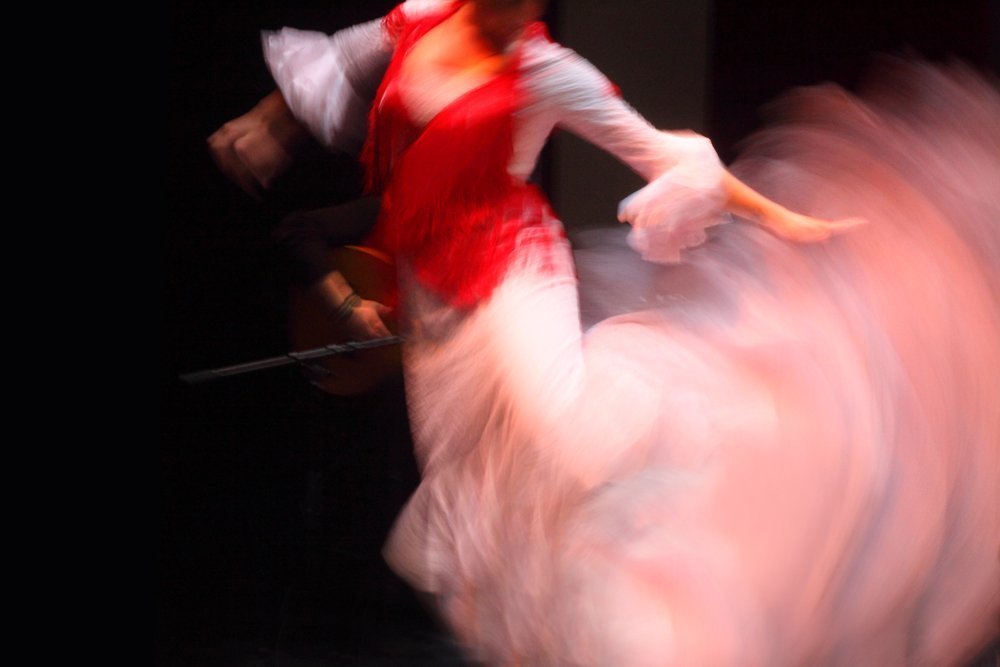 The rest of the week unfolds similarly starting with a midday procession called the ‘Paseo de Caballos’, in which magnificent horses carry people in traditional attires to the Real Maestranza bullring. Every evening some of the year’s most outstanding bullfights take place at this historic Plaza de Toros, with tickets often selling out many months in advance. 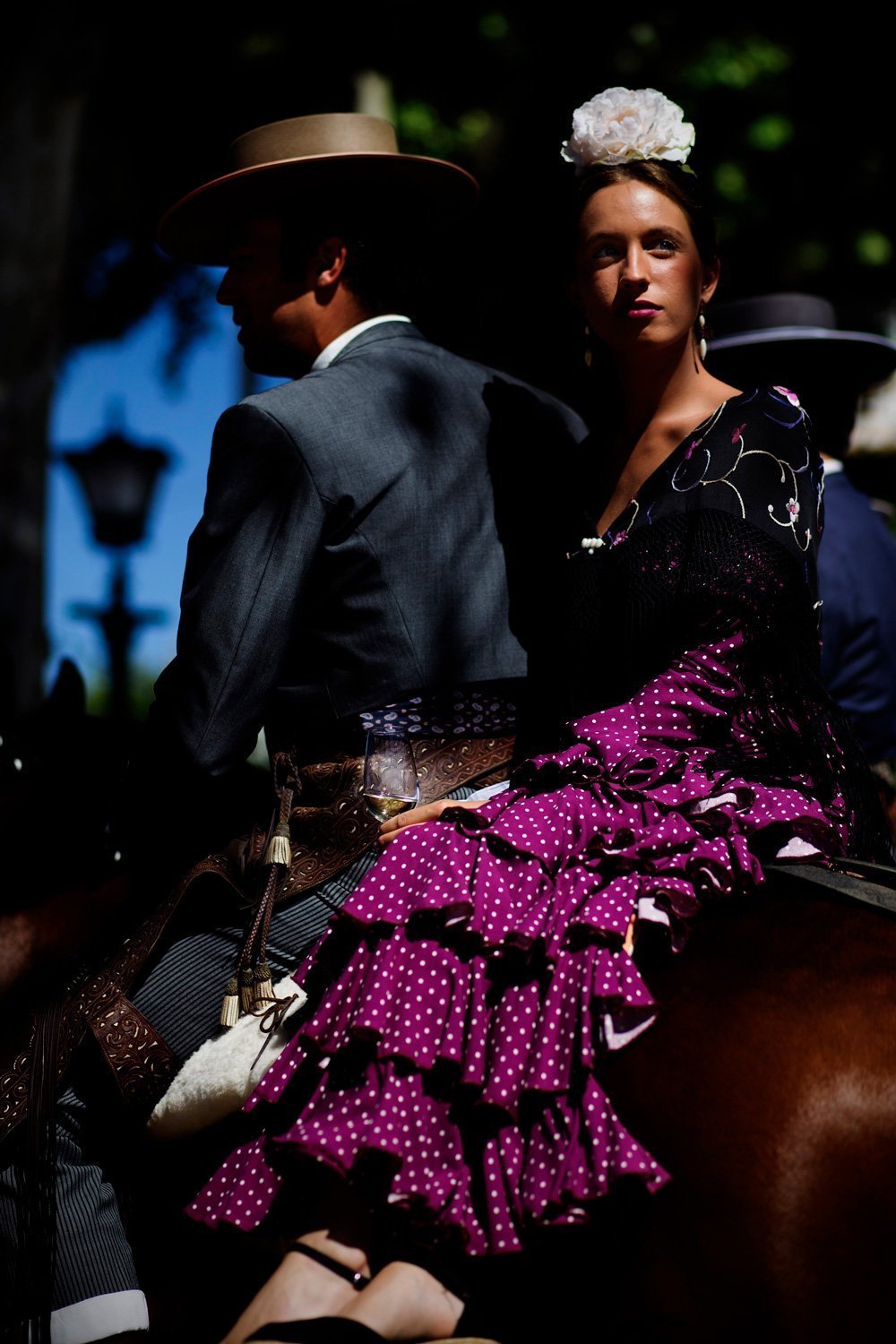 Feria de Abril and its Casetas: A Key Element of the Festivities

There are more than a thousand marquees throughout the Feria de Abril, simple yet charming and beautifully decked out. There is no shortage of Fino sherry from Jerez and Manzanilla sherry from Sanlúcar de Barrameda in Cadiz. Ham, prawns, fried fish, Sevillana Music, dancing, clapping, guitars, and even bagpipes and Rocío drums are part of the essence and atmosphere of the fair. During the week-long festival and starting early in the afternoon the tapas will begin to appear, the drinks will start pouring, the music will get louder and, as the afternoon turns into the evening, plenty of improvised flamenco dancing will begin to appear.

It is important to highlight that the majority of the marquees/booths at the fair are privately owned, and typically access is restricted to the public unless you are invited by one of the members. However, there are approximately 150 to 200 ‘casetas’ which are opened to the public and anyone can enter for free. So if you want a true taste of the Feria de Abril, you can still come and enjoy the magic of Seville and its people at one of the public ‘casetas’. Seville’s April Fair is simply the perfect scenery to immerse yourself in the local culture and experience first-hand one of Spain’s most famous ‘fiestas’. Do not hesitate to enjoy the best of Seville’s and Andalusia’s culture with us at Lugarex.

Seville’s April Fair is the perfect scenery to immerse yourself in the local culture and experience first hand one of Spain’s most famous ‘fiesta’.

More than 170 years of history and Seville’s April Fair grandeur continues to grow.